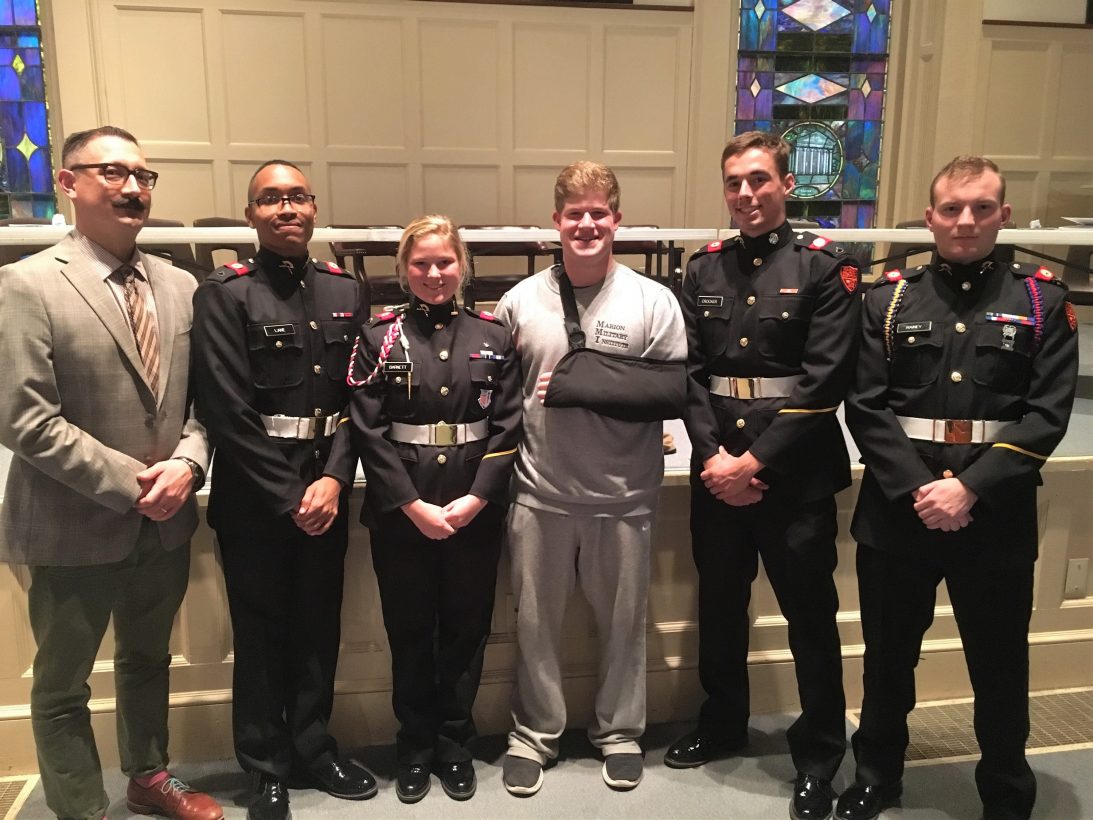 On Monday, Dec. 4, MMI held its first "Ethics Super Bowl,"won by Alpha Company. As Dr. David Spewak, philosophy instructor, notes, this new outlet was conducted as an academic intramural competition:   "We based it on the Intercollegiate Ethics Bowl (IEB), a regional and national competition. As IEB puts it on their webpage, 'The teams argue and defend their moral assessment of some of the most troubling and complex ethical issues facing society today. Questions address a wide array of topics in business and professional ethics, in personal relationships, and in social and political affairs.' There were a range of topics the cadets had to consider, for example, euthanasia for someone with alcoholism, the Muslim ban, moral justifications for quarantines conflicting with civil rights, a professor who wore blackface to a Halloween party, and how an artist’s moral wrongdoings should influence our appreciation of his or her art. "The competition resembles a debate, but the teams need not take opposing sides," he continues. "We provided the cadets with fifteen topics back in September. In the competition, the first team is given one of the fifteen topics and a question related to the topic. After conferring as a team, the first team has ten minutes to present the case and their moral assessment, including alternative views. The second team then has five minutes to present a commentary on the first team’s presentation. The second team can comment on the first team’s argument, what they thought was the central moral issue, or alternatives the first team hadn’t considered. Since the second team doesn’t have to disagree, they are free to focus on anything they think could have made the first team's argument or position better. The first team then has five minutes to respond to commentary, and the three judges have ten minutes to ask the first team questions about the case and their presentation. The judges judge each of the phases of the competition, presentation, commentary, response, and responses to questions, based on a rubric. In the initial presentation, the judges are looking at whether the teams give a clear and systematic presentation that clearly identifies and thoroughly discusses the central moral issues while drawing attention to alternative viewpoints. "Col. Passmore, commandant, originally suggested the idea of starting an Ethics Bowl competition. Ethics Bowl competitions encourage a number of traits and skills that we (the MMI community) value. First, the Ethics Bowl encourages ethical reasoning and judgment. Participants cannot rely on merely stating a view; they must provide an argument for why they chose their position and defend it accordingly. Second, the Ethics Bowl encourages critical thinking. Not only must the cadets come to conclusions about each of the fifteen cases, but they should try to anticipate possible questions. Third, since the teams must present their cases in front of the judges, they must practice good communication skills, speaking clearly and concisely. Finally, the Ethics Bowl encourages team work and camaraderie, because the teams must work together to identify a moral standard they will defend while respectfully arguing against another team."
<< Previous Back to News Next >>
News