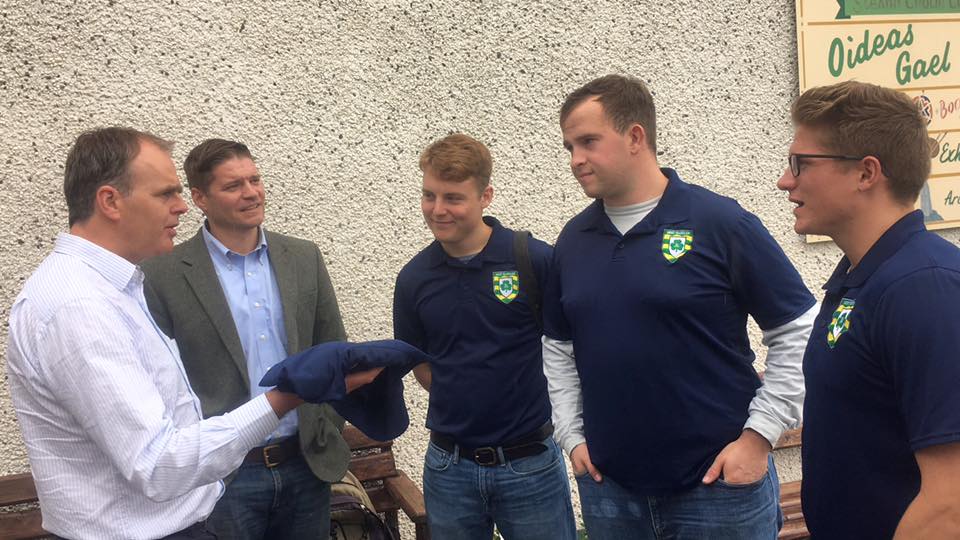 A very important Irish politician, Minister of State at the Department of Culture, Joe McHugh traveled out of his way to meet with Dr. Rankin Sherling, history instructor at MMI, and the students of the MMI Gaelic Club who are attending Irish language classes at Oideas Gael in Glencolmcille, Ireland for one month. Minister McHugh made this significant effort to meet with the students specifically to offer his encouragement in their endeavor to learn Irish. “It’s such an honor that a high-level politician like Joe McHugh is so interested in what we’re doing with the Irish language in Alabama,” said Dr. Sherling. “It just makes us want to work harder. ” Minister McHugh is not only a member of the Prime Minister’s cabinet, the Minister for the Gaeltacht, he is also the Chief Whip in the Irish Parliament for Fine Gael, one of the two main political parties in Ireland. Beyond encouraging the students to keep up their Irish language studies, Minister McHugh spoke with the club in a private meeting about global affairs, politics, work ethic, music and Irish culture including Gaelic football. “The Irish language is an important facet of the Irish culture and I think that Minister McHugh represents a strong Irish culture not just in Ireland, but abroad,” said Cadet Joshua Edgar. The students were engaged throughout the meeting and were left feeling inspired to carry on with their studies of the language and the Irish culture with a renewed sense of determination. Minister McHugh shared many personal stories during the visit, but the standout anecdote was about his own experience learning of the Irish language. When Minister McHugh was first put into the position as the Minister of the Gaeltacht, he was not able to speak Irish and took much criticism. He responded with admirable determination. Turning to Oideas Gael and others for help, he quickly became fluent, and less than three years after his initial appointment as Minister of the Gaeltacht, he will be returning to Oideas Gael in August to serve as a teacher for a week. His resolve and tenacity were inspiring. “What Joe McHugh said made me see that Gaelic is not dying, rather it is growing in places such as America,” said recent MMI graduate, Charles Lampman. *The  Donegal Daily newspaper put a story up on the meeting almost immediately following Minister McHugh's departure: http://www.donegaldaily.com/2017/06/26/minister-joe-mchugh-greets-alabama-cadets-at-oideas-gael-gleann-cholm-cille/
<< Previous Back to News Next >>
News