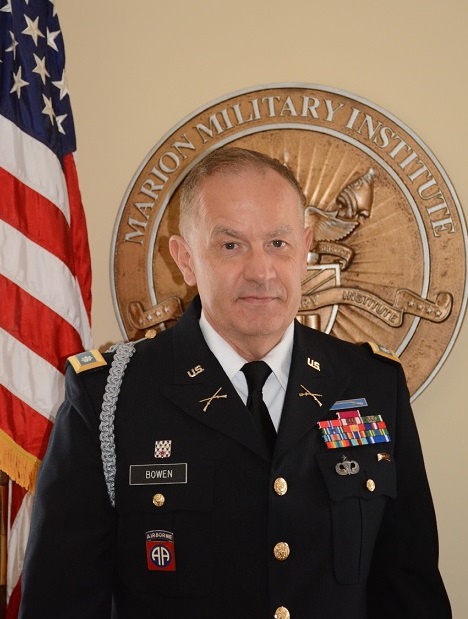 Lieutenant Colonel (retired) Thomas Bowen was commissioned from West Point into the U.S. Army Infantry in May, 1982, subsequently serving on active duty for over 22 years. He retired in March, 2005. LTC Bowen performed all of his company grade line time (platoon leader, company executive officer, company commander, battalion staff officer) with the 16th Infantry Regiment, 1st Infantry Division, stationed both at Fort Riley, Kansas, and at Panzer Kaserne, Böblingen, Germany. Later, as a field grade officer, he once again served with the 1st Infantry Division as Division G-4 during peacekeeping operations at Camp Bondsteel, Kosovo from 1999-2000. In the 1990s, LTC Bowen served as a Ranger School Battalion Operations Officer at Camp Merrill, Dahlonega, Georgia. Additionally, he served as a company tactical officer at West Point, as an inspector general in Seoul, Republic of Korea, and as a speechwriter for the III Corps Commanding General, Fort Hood, Texas. As a logistician, he served as the 1st Cavalry Division G-4 during Bosnia peace enforcement operations, and, lastly, as Logistics Assistance Officer, Fort Lewis, Washington. Assignment with Army Materiel Command included a tour of duty with the 82nd Airborne Division in Iraq, 2003-2004. LTC Bowen earned a Bachelor of Science degree from West Point (1982), a Master of Arts in Leadership Development from West Point (1993), and a Master of Arts in Clinical Psychology from Regent University (2012). His skills, badges, and designations include the Expert Infantry Badge, the Senior Parachutist Badge, the Ranger Tab, Jumpmaster designation, and graduation from the Mortar Platoon Leader Course. He graduated from the U.S. Army Infantry Officers’ Basic and Advanced (salutatorian) Courses at Fort Benning, Georgia. He also graduated from the U.S. Army Command and General Staff Course. Awards include the Legion of Merit, the Bronze Star, and Meritorious Service Medal. Subsequent to retirement from the U.S. Army, LTC Bowen worked in defense contracting with Lockheed Martin and MacAulay Brown at Fort Lewis, Washington. He also served as a leader in the retail industry as an operations manager, and in the automobile manufacturing industry as a leadership development manager. His two sons, Joshua and Jordan, both graduated from West Point and serve on active duty in the U.S. Army as commissioned officers; his daughter Sarah serves as a surface nuclear reactor officer in the U.S. Navy.
<< Previous Back to News Next >>
News