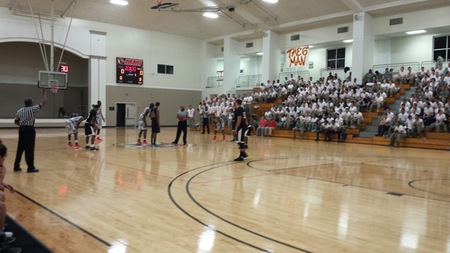 On Thursday, Nov. 3, MMI hosted the Ala. Community College Conference (ACCC) game of the week, live-streamed from JockJive.com. It was the first regular season game for the Tigers, defending ACCC champs. Mikel Davis, freshman from Montgomery, Alabama, scored the first two points of the 2016-17 season, and helped the MMI Tigers to a 96-63 victory against the junior varsity squad from the University of Mobile.  Davis was one of five Marion players to reach double digits Thursday evening.  He finished with 12 points as did fellow teammate John Clayton. Quamauri Hardy, sophomore point guard, led the Tigers with 19 points and four assists.  Neiman Dunams had 15 points while Antony Edwards finished with 14 points.  Also scoring for MMI were: Charles Tripp (8), Tyquarious Arnold (5), Carlos Bell (3), Justin Longstreet (3), David Watkins (3), Deshawn Roumou (2), and Treyvon Francis (2). The Rams from Mobile kept the score within reach most of the first half, trading baskets with the home team.  Marion got their first double-digit lead at the 4:38 mark in the first half and never looked back, taking a 51-32 lead into halftime.  The Tigers extended the lead to 38 (92-54) with just under nine minutes to play in the game. Marion (1-0) will host Jeff Davis CC Saturday, November 5, at 3:30 p.m. in the William R. Ireland Center. WATCH THE JOCKJIVE INTERVIEWS WITH MMI STAFF   FROM MMITIGERS.COM http://mmitigers.com/sports/mbkb/2016-17/releases/20161104ds769l
<< Previous Back to News Next >>
News